Introduction
Prior to the modern-day national economies, African cities and empires have been dynamic, driven by vast trading channels between cities and kingdoms. Some of the trading routes were overland, others included river navigation, while some were established across coastal cities. Powerful African empires were prosperous economically because of their trading networks, such as Ancient Egypt, Nubia, Mali, Ashanti, and the Oyo Empire. These empires increased the quantity of goods and services through vibrant trade as their empires were expanding and population was growing with minimum or no tariff barrier. In the modern days, various countries in Africa that are endowed with essential natural resources such as crude oil to produce non-renewable energy see opportunity in increasing their capacity to produce more goods and services. The excess of what is produced are traded to other regional countries in exchange for revenue.
The United Nations predicted Africa's economic growth was 3.5% in 2018 amounting to $2.5 trillion and 3.7% in 2019amounting to $2.6 trillion. During the year, the Africa GDP amounted to US$2.6 trillion with the sub Saharan Africa GDP which was US$629.8 billion, East Africa US$8.7 billion, Southern Africa US$564.8 billion, North Africa US$701.6 billion and Central Africa US$111.2 billion. The largest percentage was recorded in the North Africa 35% followed by the West Africa 31%, Southern Africa 28%, Central Africa 8% while the Eastern part of the continent recorded the least percentage (see figure 1).

These values are expected to improve as the AfCFTA envisage removal of tariff barrier. The oil producing countries will increase the volume of trade to non-oil producing countries within the continent. This will bring about cheaper energy generated from the oil because of the tariff relief. Consequently, cost of producing other goods and services in the continent will reduce. According to the law of demand, consumers will be willing to buy more if the price is cheaper. Inventories will be cleared and production will flow. Innovations to produce goods and services at cheaper rate will set-in as a result of competition. This will also trigger the need for clean energy to power industrial machine to produce and increase the volume of production in the continent.
Data suggest parts of the continent are now experiencing fast growth. This is not unconnected to the energy resources available and political stability that ensured and sustained economic policy since 2007. Nigeria has the highest percentage of GDP in West Africa (71%) while Cape Verde and some other countries have the lowest percentage level of GDP (See figure 2). 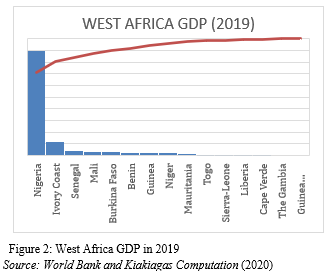 A World Bank (2018) reports the economy of Sub-Saharan African countries grew at rates that match or surpass global rates. The report says economic activity has rebounded across Africa. However, the pace of recovery was uneven among groups of countries and subregions. Oil-exporting countries generally expanded more strongly than oil-importing countries. According to the United Nations Department of Economic and Social Affairs, the improvement in the Africa aggregate growth is largely attributable to a recovery in Egypt, Nigeria and South Africa, three of Africa's largest economies (see figure 2, 3 & 4). 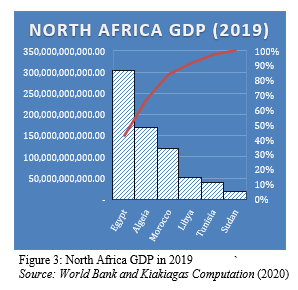 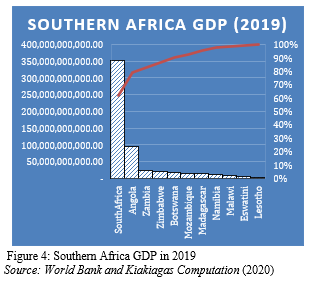 Africa has significant resources for generating energy in several forms (hydroelectric, reserves of petroleum and gas, coal production, uranium production, renewable energy such as solar, wind and geothermal). The lack of development and infrastructure means that little of this potential is actually in use today.
The largest consumers of electric power in Africa are South Africa, Libya, Namibia, Egypt, Tunisia, and Zimbabwe, with each consuming between 1000 and 5000 KWh/m2 per person, in contrast toeast African states such as Ethiopia, Eritrea, and Tanzania, where electricity consumption per person is negligible. Petroleum and petroleum products accounted for a 46.6% share of Africa's total exports in 2010; the second largest export of Africa as a whole is natural gas, in its gaseous state and as liquified natural gas, accounting for a 6.3% share of Africa's exports.

Energy Trade Integration and AfCFTA
Energy trade integration in Africa especially crude oil, has long been seen by African policymakers as a mechanism for fostering industrial prosperity. Energy both renewable and non-renewable are used to power light and heavy machines in the industrial sectors for productivity. Several trade and regional economic integration groups have been formed over the years. These include Southern African Customs Union (SACU), East African Community (EAC) and the Economic community of West African States (ECOWAS) to ensure flow of goods and services with little or no tariff among the countries.
These organizations aim to ease the trade barrier among themselves but this has not yielded the expected result in the respective regions, because no African region can act in isolation. There is the need for continental trade integration that will ensure tariff barrier removal to promote economic growth in Africa. The AfCFTA is the most ambitious initiative in this vein. It can support the realization of the continent’s economic promise by helping raise productivity and investment, and thereby increase income levels and reduce poverty. Assessment of income and welfare gains from trade liberalization under the AfCFTA and potential transitional costs for countries participating in the agreement is noted. The discussion focuses on the potential effects of the AfCFTA on income, welfare, trade flows, employment and tax revenues.

Economic Growth and Removal of Tariff Barrier in AfCFTA Agreement
It was earlier stated that no African region can trade in isolation to increase the continental productivity. Economic growth is ensured if there is increase in the capacity of African countries to produce more goods and services. This can only be realized when the non-renewable energy such as crude oil and natural gas  to power industrial machines are readily available with no tariff barrier. The AfCFTA has the potential to increase income and welfare significantly for its member countries.
Previous studies have estimated that African countries could reap long-term income gains of up to 5 percent from the removal in trade barriers in the context of the AfCFTA. The implementation of the AfCFTA could result in transitional costs for member countries. These may include tax revenue losses from no import tariffs, higher income inequality and higher unemployment. These could occur especially where trade liberalization is not accompanied by reforms to make labor markets more flexible and workers more mobile to grasp new opportunities.
Given the gradual nature of tariff barrier removal envisaged by the agreement, countries should have time to mitigate these potential costs. For the continent as a whole, tax revenue losses from the elimination of import tariff are estimated to be modest. Because any tariff revenue losses are likely to be offset eventually by higher tax revenue from increased consumption and income, as a result of removing tariff barrier. Limiting negative employment effects will require increasing formal labor market flexibility. Addressing adverse income distribution effects calls for broader and more efficient social safety nets.
Training and retraining programs to adapt worker skills to new needs may also be necessary. Improving revenue mobilization will be important. Given that income gains may take time to materialize, the corresponding revenue increases may not compensate for tariff revenue losses in the short term. In addition, higher revenues will also be needed to help finance infrastructure improvements and upgrade social safety nets to mitigate transitional costs from removing tariff barriers.
Furthermore, an enabling business environment, access to credit, and adequate human capital are critical to support energy trade. A more fully developed regional financial infrastructure can also help facilitate further intraregional trade.

Conclusion
Maximizing potential welfare and income gains from the AfCFTA would require member countries to substantially and strategically reduce tariff barrier. It is important first to remove the tariff barrier that impose the highest trade costs. In this regard, customs and administrative entry procedures, technical barriers to crude oil trade and other forms of energy tradeable should be tackled up-front. It would also be important to improve the quality of trade logistics and close Africa’s infrastructure gap, particularly in the areas of ports and road networks. Conclusively, upholding the provisions of the AfCFTA agreement will be crucial to ensure economic growth of the continent. An institutionally strong and effective AfCFTA secretariat, with the capacity to implement trade rules in line with the text of the agreement, will help build credibility and reduce trade-in-energy policy uncertainty.