The last three years saw a general decline in the Floating Storage and Regasification Unit (FSRU) sector. These years have seen a change in the pervading business model, with innovative ideas being actualised. The reasons and factors behind this new trend have not been well understood by all.
In a previous  article, Floating Storage and Regasification Units (FSRUs), the trade of Liquefied Natural Gas (LNG) was examined, with a specific focus on FSRUs, which is becoming more commonly used in transporting LNG as well as regasifying LNG into natural gas. This article picks up from the previously mentioned article, with a focus on the current market trends between 2017 and 2019.

Between 2017 and 2019, the number of FSRUs in operating as terminals increased by only one unit, although there was growth in other aspects of the industry. Different countries have also begun (or continued, as the case may be) working towards having FSRUs operations as a preferred model. There has also been the introduction of the mini-FSRU, showing the industry is still going through various forms of innovations. Some nations discontinued FSRU projects due to reasons such as increased production from their gas fields.

Vessels in Operation
In 2017, there were 26 FSRU vessels in operation, with 23 functioning as terminals while the other three functioned as LNG tankers. By 2019, the number of units operating as terminals had increased to 24, while those operating as LNG tankers had grown to 10. This gives a total of 8 FSRUs added to the number, although the distribution was uneven. The 16 years between 2001 and 2016 produced 26 FSRUs while the three years between 2017 and 2019 produced an additional 8. The three year period from 2015 to 2017 saw a the highest growth rate of FRSUs with 15 FSRUs produced within that period. . This shows the production rate has reduced in the past couple of years.
A notable occurrence in the period under consideration is the cancellation of three projects, as well as the closure of three terminals, while six new terminals were opened. The cancelled FSRU projects were in Puerto Rico, Uruguay and Ghana. Ghana had already begun construction of the FSRU-based terminal in Tema. Operations were due to commence by mid-2020 and gas was to be supplied by Gazprom.  The construction of the terminal has been suspended because Ghana discovered gas fields, increasing their domestic supply capacity. Ghana can meet short- and mid-term local gas demand; hence it deemed the construction of the FSRU-based terminal unnecessary and a moratorium has been placed on future LNG projects.
FSRUs have flexible usage, such that they could function as a terminal, just a gas carrier or a power generation platform. This flexible usage is the reason why information provided about FSRUs might not be accurate in a few months, as an FSRU used as a terminal could be leased out as a gas carrier alone. FSRU usage is based on demand. To this end, the drop in demand for LNG for power generation, and gas imports from Bolivia has led several FSRUs to depart from South America to new projects. Fifteen FSRUs are to continue operating in the same location.
There are currently 34 FSRU vessels available. The lack of corresponding terminal projects has led to an oversupply of FSRUs, with ten vessels now operating as LNG tankers (i.e. operating in back-up mode). These make up almost 30% of the FSRU fleet. This oversupply might be short-lived as new FSRU markets are emerging in Australia and Germany. 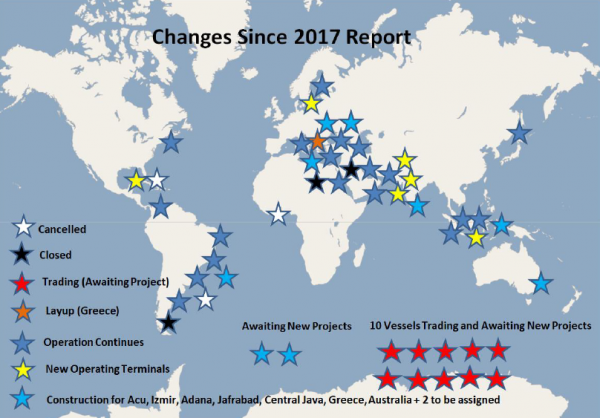 Business Model
A major emerging trend noticed is that energy companies are now outrightly purchasing their FSRU, rather than leasing from the shipping companies. The traditional leasing companies, such as Golar LNG, and Hoegh, have increased their FSRU fleet size from 22 to 28, yet most of them are used as LNG tankers – yielding lower rates-  because they haven’t been many terminal projects requiring them. These companies increased their fleet size on a prospective basis, but it has not paid out so far, as vessels on tanker service earn $80,000/day, whereas those on terminal services receive $120,000/day. To this end, it is not likely that these companies will order new vessels until the currently underutilized vessels are assigned to a terminal project. The leasing companies have only two vessels assigned to terminal projects; one in Port Acu, Brazil and the other in one of two terminals (Crib Point or Port Kembla) in Australia.
One reason the new companies are now directly purchasing FSRUs, rather than leasing, could be the fact that they plan to operate these vessels for such a long period that leasing is unnecessarily expensive. An example of the switch from leasing to purchase is found in the Lithuanian Governments decision to purchase the Hoegh owned FSRU, called The Independent, in 2018. Lithuania has been leasing the vessel but decided to purchase The Independent after 2024 (it is currently under a ten-year lease agreement) after a national economic analysis was conducted. Buying the vessel will cut annual operating costs by £20 million. The shift towards ownership, at the expense of leasing, is a factor causing an oversupply of FSRUs.  In total, there are thirty-three vessels owned by the leasing companies, while nine of the units currently under construction are purchased outright for by the energy companies.
The cost of constructing (or converting a gas carrier into an) FSRU has not changed. The order value of an FSRU still ranges from $250 - $300 million.  The industry design standard is 174,000 cubic metres tanker, with 1 billion cubic feet per day (1 bcf/day) gasification capacity. 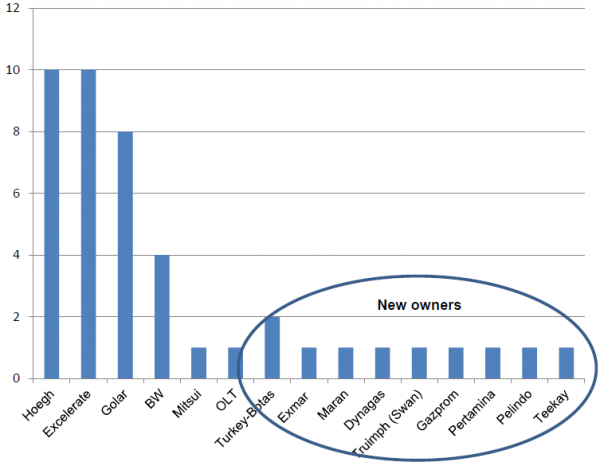 The Mini FSRU
In November 2018, Indonesia received a 26,000 cubic metres capacity FSRU, called Karunla Dewata, built by the PaxOcean Group, in China. This is the world’s first mini-FSRU, and it operates in Bali, Indonesia. The mini FSRU will regasify 50 million standard cubic feet per day (SCF/d) of LNG, and it will be used to supply energy to neglected regions in Indonesia. Indonesia is relatively new to importing LNG; it has been seeking out sources of energy and the FSRU model offers several benefits to Indonesia. The vessel was designed to carry four Type C tanks, each with 6,500 cubic meters capacity. The possibility of constructing a mini-FSRU opens up more possibilities to countries seeking LNG, especially for small island communities. These small vessels can power 200 – 300 MW power stations. With time, more information would be made available on mini-FSRUs as more countries adopt this vessel model.

Outlook
The FSRU market is expected to grow steadily but at a slower rate than the high growth period of 2015 – 2017. Construction of vessels will reduce, although new FSRU markets are opening in Australia, Europe and Asia. Construction of vessels will increase once the current surplus of vessels finds assignments. Construction of FSRU vessels might become strictly based on order rather than on a prospective basis, to avoid a repeat of the current vessel surplus situation. Lastly, the mini-FSRU sector is expected to grow considerably shortly as it aids the switch from oil to gas and numerous small islands in the world need to make this switch.

KiakiaGas Limited is a leading Gas business in Lagos,Nigeria with expertise in LPG retailing, New Gas Market development, Building of Gas Plants and Gas strategy advisory.
If you need a partner with hands-on local expertise in the Nigerian Gas space or any of our bespoke solutions/services, write us at gaspreneur@kiakiagas.com or call/Whatsapp: +2348085269328