Making a Case for Small Scale Opportunities for FSRUs

Introduction to LNG transport and regasification
As the world continues to consider LNG as a viable alternative fuel source in meeting present and Future Energy demands worldwide, the LNG supply chain has been forced to evolve to save costs, speed up supply and boost overall efficiency with several note worthy inventions. One such innovation in the exploration and production phase is the development of floating liquefied natural gas or FLNG vessels which are designed to obtain, process ,liquefy by freezing and transfer LNG to other sea vessels with all this being done offshore.
Another Great innovation is the development of FSRU (Floating Storage Regasification Unit) vessels that presents a collapsed model of operations in place of the traditional transportation phase by carrier vessels and regasification at LNG terminals. 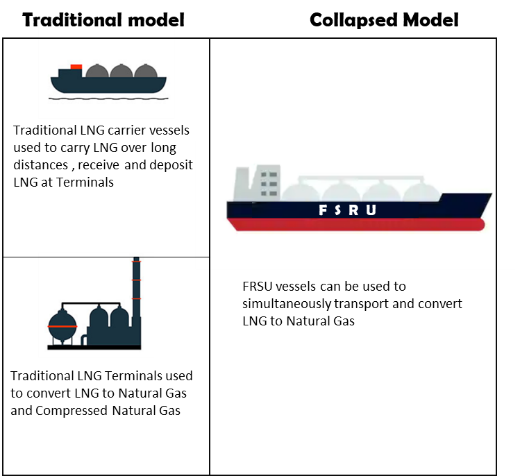 The benefits of this technology can be realised with ease, with immense saving in both cost and time, the application of FSRU technology in LNG logistics cannot be understated and deserves a closer look.

Advantages of FSRU vessels
Speed of deployment
Generally the cost of construction of FSRU vessels are half that of traditional LNG terminals with the average construction time of under 2 years with even shorter time period if an already existing LNG carrier is converted to a FSRU vessels. For example the LNG Croatia which was converted from a 2005-built 140,000 cbm vessel named Golar Viking was completed under a year at the Chinese Huarun Dadong yard.

Flexibility
FSRU’s are mobile and this affords them flexibility in delivering Natural Gas to new and existing markets. FSRU’s are usually chartered and this allows them to be reused by multiple parties in different regions and allows them to serve markets with seasonal demands such as winter periods in the US which leads to increased demand of LNG for heating purposes.

Cheaper option
The cost differential between traditional terminals and FSRU vessels cannot be understated as FSRU vessels usually cost 50% or less that of Land based terminals. An FSRU vessel can cost anywhere from 150 million dollars depending on the size and scale, while an LNG terminal on the other hand could cost upwards of a billion dollars (also size dependent).The price of an FRSU also decreases further if converted from an existing LNG Carrier vessels. It is important to note that FSRU vessels can also be hired for a period of time and need not be purchased outrightly , further increasing payment options.

FSRU’s brief history
Historically FSRU’s first came into use in 2001 when the US company, Excelerate Energy was hired to construct the first FSRU for the Gulf Gateway project located at the Gulf of Mexico , North America. The project which had a capacity of 500 million cubic feet per day and a peak capacity of up to  690 million cubic feet per day was commissioned in 2005. Unlike previous terminals the Gulf gateway project used an FSRU for regasification of the processed LNG before reaching ports located at the coasts. The EXCELSIOR as it was named, was formerly a  138,000 m³ LNG carrier that was modified to include six vaporization trains with boiler capacity of 56 tons/hr to 71 tons/hr, a feature that provides additional steam capacity for closed-loop regasification operations, two small high-pressure LNG pumps and six large high-pressure LNG pumps. 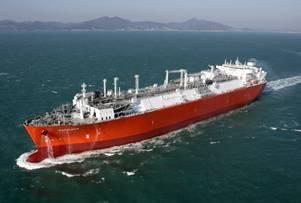 The Excelsior also included two retractable buoys fitted within a specially designed compartment connected to the onboard regasification equipment. The buoys functioned as both a avenue for gas delivery but also as mooring for the vessels, eliminating the need to anchor ships at Deepwater ports. The system was developed, designed and tested by Excelerate Energy during crude operations in the North Sea to bring in gas supplies when other vessels were shut down by Hurricane Katrina in 2005. The vessels also pioneered LNG ship-to-ship transfer, further evolving the LNG supply chain and brought about the advent of FSRU vessels today. According to the international Gas Union (IGU) 2020 report as there are currently 25 FSRU vessels worldwide and a further 14 vessels to be deployed in by 2021, the IGU also speculates that as much as 50 FSRUs could be in operation by 2025.

Small Scale FSRU: A Case Study of Southern Asia Markets
Flexibility and mobility are the watch key criteria for the evolution of FSRU’s and nothing embodies this more than small scaled FSRU’s. They are basically smaller FSRU’s with reduced capacity and scale allowing them to travel on smaller water bodies such as inland rivers and reach isolated regions that are only reachable by boats and small water vessels and also supply areas with smaller LNG demands. 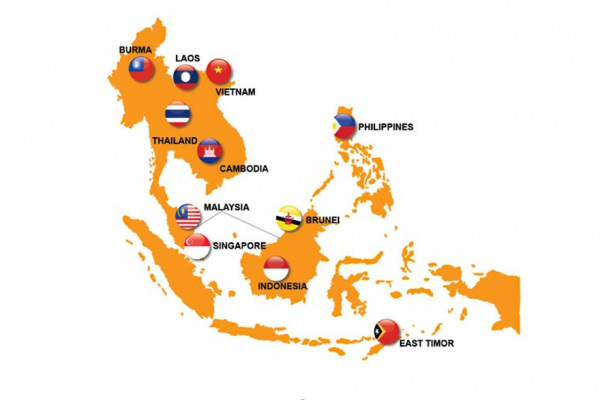 An example would be countries in  such as Indonesia and the Philippines which are made up of isolated islands with extensive waterways and varying levels of demand for LNG. These islands are isolated by extensive waterbodies and are only reachable by watercraft. Indonesia for example is made up of over seventeen thousand islands and the Philippines over Seven thousand islands all connected by waterways of varying depths which are mostly too shallow to support normal ocean faring vessels. Some estimates have put regional demand for LNG as low as 30 Million Cubic Feet (MMCF) per year. Hence due to the terrain of the region, creating an LNG supply chain between these islands using traditional methods such as pipeline or road transport vehicles would require extensive infrastructure expenditure, effort and time.
Alternatively, the use of traditional FSRU vessels to supply these islands would be hindered by the depth of the connecting waters ways not to mention the astronomical cost and the ensuing inefficiency of using vessels whose normal cargo capacity ranges upwards of 120,000 cubic meters.
Ideally vessels with capacities as low as 7500 cubic meters would be able to cater to this regions efficiently and would cost considerably less at an analytical of about 50 -70 million dollars for 20,000 to 50,000 cubic meter FSRU vessels instead of traditional FSRU’s which would cost upwards about 250  million dollars for a 170,000 cubic meter vessel.

It is important to note that as of now no small scale FSRU has been built however the economic benefits of such an undertaking cannot be understated. Several milestones are needed to be achieved, both technical and economic to realise the creation of small scaled FSRUs. One such mile stone was achieved in 2017 with the first ship to ship transfer of LNG from a FSRU to a small scale LNG carrier. The transfer occurred in the Baltic sea between the FSRU Independence with a capacity of 170,000 m3  and the LNG tanker Coral Energy with a capacity of 15,600 m3. The operation saw the  FRSU transfer about 15,000 m3 of LNG to the smaller craft making it the first operation at this scale and proving the mechanism for transferring LNG between vessels of dissimilar capacities possible.

The Nigerian LPG Market is the next success story of the Global LPG industry, if you need a partner with a global perspective and local expertise in the Nigerian and African space, kindly book for a free session with our team of experts to help you http://www.kiakiagas.com/book-session or write us an email at advisory@kiakiagas.com or Whatsapp: +2348085269328