Currently, 50% of Germany’s net electricity is generated from solar energy. Harnessing solar energy to generate electricity is becoming more mainstream as the world moves towards a green future. The International Energy Agency projects that Solar Photo-Voltaic would be the most installed power generation capacity by source by 2040. Solar is slowly being adopted around the world, due to its zero emissions of harmful substances during operation. It is necessary to examine how solar energy is harnessed and the current efficiencies.
Solar energy refers to energy harnessed from the sun. The sun gives off light and heat and these can be harnessed for different activities i.e. the light or heat from the sun can be harnessed for power. Solar energy has been harnessed since 7th Century B.C. where magnifying glasses were first used to concentrate the sun’s rays to make fire (and burn ants). As time passed, the technology improved with Roman bathhouses constructed to have large south facing windows which let the sun’s warmth into the designated area, between the
1st to 4th Century A.D. There have been a large number of historical inventions and innovations aimed at harnessing the sun’s energy to meet human needs, and there will be more of such.
This article will focus on solar energy harnessed to cook food and to produce electricity. The solar collector was invented in 1767, which was later used to cook food in the 1830s. This was relatively earlier than the discovery of the photovoltaic effect in 1839. These technologies have greatly improved in the last century and this article shall examine their operations.

How the Photovoltaic Cell Works
Solar photovoltaic conversion is the conversion of sunlight into electricity. Photovoltaic (PV) cells react to light by turning part of it into electricity. Silicon is the most used PV cell material, for this reason a lot of research has gone into silicon as a way of understanding PV cells. When light strikes a silicon crystal, it is either reflected, absorbed or goes right through the crystal. Absorbed light (of great energy) upon striking the silicon crystal causes electrons to separate from their bonds. These free electrons are the means by which electricity flows.   The electrons are acted upon by a (built-in) potential barrier which causes the electrons to produce a voltage used to drive a current through the circuit. The potential barrier can be created by doping the PV material, i.e. adding an impurity in order to aid electron movement. In 1960, solar cells were 5% efficient, but recent solar cells are 24% efficient, although the majority of solar panels are below 20% efficient.

Photovoltaic System Set-up
There are certain considerations necessary to effectively install a PV system. PV modules (collection of solar cells) need to be mounted where there is direct access to sunlight. PV modules are usually mounted on roofs but can be mounted on the ground as well. It is also necessary to ensure that there is no shading around as even the shadow of a single branch of a
leafless tree can significantly reduce the power output of a solar module. PV modules are conventionally oriented towards the true south but would also work fine (with less efficiency) if on a roof facing east or west. Solar modules (specifically stationary modules) also have to be tilted plus or minus 15° with respect to that location’s geographic latitude, based on the time of the year.
The flow of energy in a stand-alone Photovoltaic system goes thus: 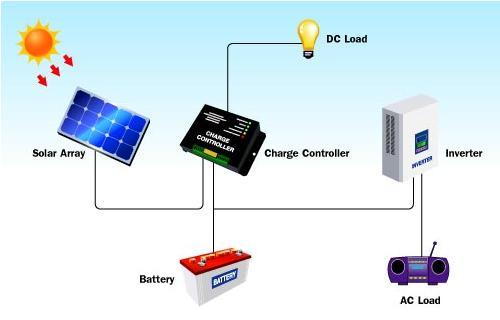 Cost Considerations between Photovoltaic System and Natural Gas as Household Energy Source
The major challenge with the solar PV system is the cost of installation. There are no (or very negligible, if any) operating costs involved in using PV systems, yet it is currently the most expensive source of electricity. This is due to the cost of equipment needed to set up a PV system.  Producing electricity through natural gas is still the cheapest. The Energy Information Administration (EIA) predicts that electricity generated via natural gas combined-cycle will remain cheaper than electricity generated from solar photovoltaic systems. This is ascertained by taking into factor the capital and operating costs of both methods of producing electricity of a period of time.

Solar cookers are still a work in progress. They take too long to cook meals, sometimes 2 hours longer than firewood. Solar cookers are relatively expensive. A search on Amazon.com showed the cheapest solar cooker costs over $70. This is unattractive as it is limited in efficiency as well as availability. One would not be able to cook with a solar cooker once the sun is not out i.e. solar cookers cannot be used during the early morning or night, or during rainfall. To this end, Cooking gas(Liquefied Petroleum Gas) is still the best bet as it is far cheaper then solar cookers and is independent of the weather.

The technology used to harness the sun’s energy keeps improving with time, and in a few decades, solar energy would be easier to harness. It is therefore necessary to consider natural gas as an available, cheap and efficient source of energy. Natural gas provides relatively cheap electricity, and Liquefied Petroleum Gas (a by-product of natural gas processing) is a relatively cheap fuel for cooking. It is imperative that while renewable energy sources are being developed, natural gas (and its products) are used as a bridge to the fully green future.

KiakiaGas Limited is a leading Gas business in Lagos,Nigeria with expertise in LPG retailing, New Gas Market development, Building of Gas Plants and Gas strategy advisory.
If you need a partner with hands-on local expertise in the Nigerian Gas space or any of our bespoke solutions/services, write us at gaspreneur@kiakiagas.com or call/Whatsapp: +2348085269328