Introduction
Combating climate change involves a drastic change in the patterns of energy production and consumption that does not interfere with the quality of life and economic growth. The Sustainable Development Goals (SDGs) have also been placed on the agenda to include access to affordable, secure and sustainable resources. SDGs emphasize that access to energy must be established by the use of non-conventional emerging energy sources in an economically viable and environmentally sustainable manner. Energy has been a key driver of social and economic growth, helping to alleviate hunger, increase food production and access to clean water, improving public health and education, creating economic opportunities for young people and empowering women. Around the same time, the availability of electricity from conventional fossil fuel sources has raised the amount of pollution in the atmosphere exponentially.

As a way to mitigate the adverse effects of climate change, low-carbon energy policies have been proposed. A better quality of life depends on access to energy from natural gas, and a portion of the world's population do not have access to modern energy services. Across the globe, energy demand and supply are not consistent. Consequently, each region is striving to source for cleaner energy in order to increase the quality of life instead of contributing to global warming with the use of dirty energy. An example of this is the option of natural gas as a fuel to ensure a smooth transition to a sustainable world of energy. The earth has large amounts of natural gas, but most of it is in places far from where the gas is required. Natural gas must be converted into liquefied natural gas (LNG) so as to be able to transport this cleaner-burning fuel through oceans, a process called liquefaction. This has changed with the introduction of floating storage and regasification units (FSRUs), which are basically floating terminals for the LNG. This article attempts to assess the possible roles of LNG in generating cleaner energy for electricity and transport.

Liquefied Natural Gas (LNG)
According to the Britannica (2020) LNG is a natural gas (NG) that has been liquefied for ease of storing and transporting which is 600 times smaller than natural gas when it is in its gaseous form, and it can be easily shipped overseas. LNG is produced by cooling natural gas below its boiling point, −162 °C (−259 °F), and is stored in double-walled cryogenic containers at or slightly above atmospheric pressure. By merely increasing the temperature, it can be transformed back to its gaseous state. Aside from Angola, Equatorial Guinea, and Cameroon, Nigeria is one of the countries blessed with LNG in Sub-Saharan Africa.

Roles of LNG in Providing Cleaner Energy
The role of LNG has been largely positive over the last two decades. LNG has contributed to reducing carbon emissions and provided reliable support and back-up for renewable energy. Two of the biggest decarbonizers on an absolute and relative basis are the United States and the United Kingdom. They have dramatically reduced their coal burnt in the power generation sector while greatly increasing the penetration of natural gas. In the United Kingdom, a modest carbon tax has been adopted to essentially eliminate coal from the country’s power generation mix. The United States has no carbon tax, but the shale gas revolution has lowered the cost of natural gas to a level that leaves many coal-fired power plants unable to compete. In Europe and Korea, despite the occasional policy inconsistency, trends are in a similar direction—the combination of renewables and natural gas is pushing coal out of the mix. Emerging markets have embraced natural gas as a power generation fuel but rarely as a strategic component of a clean energy mix. China has increased her purchases of LNG over time. The purpose of Chinese LNG purchases has been to improve air quality in northern China, an effort that has been stunningly successful and is expected to continue for some time. China’s LNG binge has contributed directly to increased confidence among LNG project sponsors, and that confidence translates, in part, to positive investment decisions for new capacity.

According to USAID (2020), Nigeria is the largest economy in sub-Saharan Africa. It is also endowed with large oil and gas deposits, and huge potentials for hydro and solar energy. As demand for local consumption of gas intensifies, especially for gas-to-power, Nigeria may take advantage of the low prices to increase power generation. Uninterrupted power supply through the use of LNG will bring about a functional industrial hub. According to the Nigeria Electricity Regulation Commission (2020) the six power generation plants of Afam, Sapele, Egbin, Ughelli, Kainji, Jebba and Shiroro generated a total of 5048 Megawatt (figure 1). 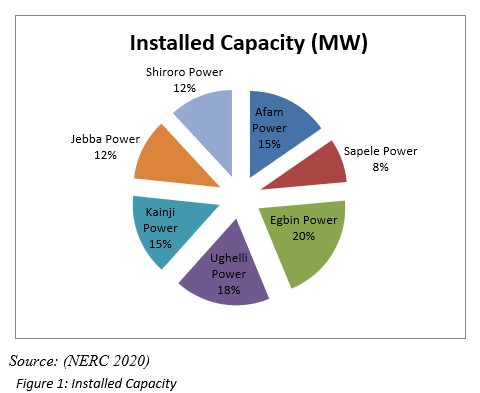 LNG can reduce problems of poor air quality when used in power generation, as an industrial fuel and as a transportation fuel. While Compressed Natural Gas (CNG) is used in passenger and return-to-base commercial vehicles, Liquefied Natural Gas (LNG) also presents a cleaner alternative to the use of oil products for heavy-vehicle road and marine (inland) transport. LNG has contributed to reducing carbon emissions and provided reliable support when combined with renewable energy. This combination can be delivered as integrated solutions for centralized energy systems as well as for decentralized systems, for example, for the residential market, where solar applications are becoming increasingly available. On these grounds, natural gas can act as a companion fuel to renewable and play a key role in the transition to a low-carbon energy system.

Conclusion
As gas-fired generation emits half the CO2 of coal-fired generation, the contribution that gas could make towards a low-carbon environment is thus substantial. Natural gas has proven its carbon advantage relative to coal, and as developed countries have shown, natural gas can have an immediate impact in reducing local pollution; these benefits should be incorporated in policy frameworks. To meet the growing demand for power generation, transmission and distribution, as well as means of transportation as the world, tries to tackle emissions, power plants and vehicles with the use of cleaner liquefied natural gas energy would be required. LNG has the potential to give fuel cost savings compared to traditional diesel and premium engine.